I came to Philadelphia for the second time as a Fulbrighter. There are more than 150 Fulbrighters in over 70 countries. Each of them would cost around 1,500 to 2,000 dollars to study in the U.S. The reason why Fulbright is the most established scholarship in the U.S is because they devote much money to the awardees every year.

The theme for this Conference is Civil Engagement and Arts – to learn how Philadelphia uses Mural Arts to change the fate of the city and lives of local residence. Philadelphia was a place full of gangsters and guns in the 1980s. Many people were not willing to live here. Under such disturbing circumstance, Graffiti was the favorite thing many people liked to do then. But at the same thine, those who made Graffiti were those causing trouble to the society.

Graffiti is a kind of popular art now. At that time in Philadelphia, this was really scrawling. Young people often painted at a random wall, which made the city into such a mass. In addition, the security situation back then was terrible. To deal with this problem, the mayor decided to take an innovative action in 1984. He invited a young artist named Jane Golden and launched an anti-Graffiti Project. Jane found some Graffiti painters were of great talent although they were once gangster member or even sent to prison. Graffiti and Mural Arts were similar due to the fact that they were all made in big walls and required adventurous spirits. So Jane found such Graffiti painters and cooperated with them. This made painting not scrawling any more. There are mural arts in many cities. But the most unique feature for Philadelphia is that art is not used for pure entertainment but for changing the fate of the city. All mural arts here are made by artists and local residents. 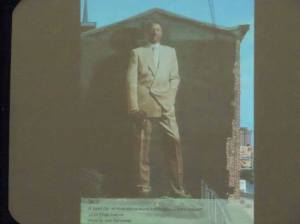 How to change one city through art? For example, this is a truck collecting trash. Have you ever seen such a colorful trash truck? This project is made by some artists with local students. For those students, they learn to paint and influence the community through innovative actions. Also such actions are not disposable but have long term effect. Students learn painting and get to know the society through cooperation with others. For the city, if there are beautiful trucks like this, they could add on to the beautiful appearance of this city and erase the ugliness of trash. 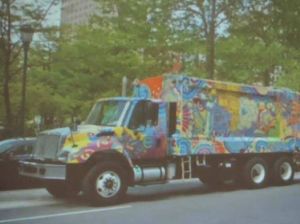 This lady is the head of Mugal Arts Museum, who introduced the muarl arts in Philly to us today. I like her statement about arts that, “Many people see arts as the icy on the top of the cake. We dont want arts be the icy, but the cake.”

Morning tour starts from Mural arts. This is my favor one. Look closely at the trees ~ they are two trees embracing each other, symbol of love . The painter was preparing for a wedding when he did this piece of work. 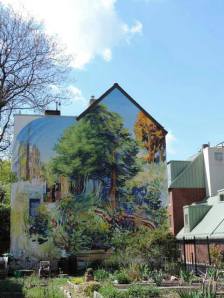 Another famous piece. Theme is something like ‘across the generation’. Forgot the original phrase. What the artists did was they went to school asking kids to pose the lifestyle they would like to have in any time. Some posed for 18th century style while others some did modern days. The point is no matter how time changes, there are always common features across the boundaries of different generations. 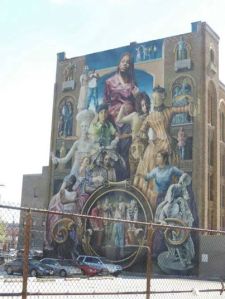 After we watched the city mural, we were led to a painting studio. The ongoing project is about Martin Luther King. One can sense his influence to African Americans here. The artist chose his photo while he was leading people for protest because current art works about him are mostly based on his speech gesture. The last one is a draft for this mural. 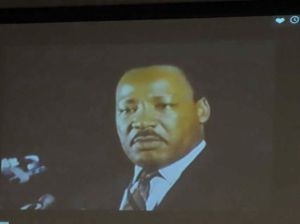 This is how one mural is made. Artists would divide a large picture into small sections with a small caption showing the overall effect of this painting. Different sections have their own labels which are used for final combination. What we are doing is very simple- to add colors to different shapes.

How much would it take to make a mural like this? Normally, a mural covering 200 square meters would cost around 80,000 dollars with an extra 45,000 dollars construction fee. So who would pay for them? And how long it would last?

This is a charitable institute, Rock ti the future. There are around 93,000 young people living in poverty in Philly. At the same time, due to the cut on governmental budget, many schools have to shut down and many teachers lose their jobs, leaving students unable to find a proper school. This institute offer free rock music training for poor students to prepare them for better future through music. 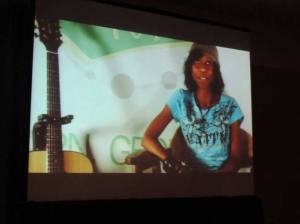 The boy next to me is from Afghanistan and the other girl is from Pakistan. Fulbright would support 4000 international students from 150 countries and 900 visiting scholars. Pakistan benefits greatly from this because 100 of the students would receive such support. Before I came to the activities held by Fulbright, I did not know Afghanistan and Pakistan very well. However, these two countries receive much support from Fulbright. So every time, I could meet many participates from these two countries. Fulbrighters from the two countries often surprise me. They all speak very fluent English with almost no accent. In addition, they are very humorous and outgoing, really different from what I saw in the news. As a Chinese, although we are neighbors, what we know about these countries are all from news, which are all about terrorist attacks, bombs and political unrest. It seems people there are living a miserable life. In fact, I sense no difference between me and the people I meet here. In a sense, they even overpass some of my peers in China. For example, we still live life in a limited view, only caring what we are eating and how we are living. But we do not care too much about other people.

The four guys all come from Afganistan, but they all look so different. This is one of the features of Afgan. Although in China different ethnical people may also look different, but when most of times you can recognize how Chinese look like. Of the over 10 Afgans that I met the look like people come from different countries. It is not only related with ethnical groups but also the territory. People from the same ethnical groups but different territory also look different. Even brothers and sisters from same family may look very different ~ not only in terms if face but ethnically look very different. Hi guys remember to invite me to your wedding as the reward to my generosity to take picture for you

I had a pleasant and touching dinner with an American family. There aren’t many people so we could have an intimate conversation. We come from different cultural background so everyone is curious about others country and culture. I come with a girl from Thailand and a girl from Chili. We had great dinner. I always won’t eat too much but today I am so full.