(This article was posted on”China Garments”2015.7. Unless otherwise specified, all of the pictures used in the article are provided by designer)

With the rapidly growing “China craze”, Chinese fashion designers have been given much attention by media around the world. Establishing a personal brand is many fashion designers’ dream. Because of the high threshold for startups in the early days, most of the designers chose to design for commercial brands or to just give up the dream of launching their own brand. Today, things are different. For one thing, e-commerce, Taobao in particular, makes entrepreneurship much easier; for another, in terms of financing, parents of post-80s and post-90s generations are more willing to support their only child to do what they love to do, therefore, almost all of them have offered financial support to their children’s entrepreneurial desire within their power. With the development of the financial system and policies, domestic professional investment channels are becoming increasingly sophisticated together with the popularity of crowd funding, enabling financing activities much easier. In addition, in recent years, the depression of employment market objectively forces more young students to embark on entrepreneurship. In order to ease the employment pressure of fresh graduates, the government is willing to encourage graduate to start their own business by providing many preferential policies accordingly. Driven by a number of reasons mentioned above, it has almost become a trend for the fashion design students to establish their own brand after graduation, and these emerging designers have become a main force in current popular “independent designer” team. 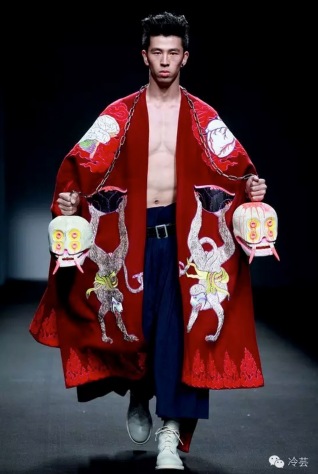 (Picture is from SANKUAZ. Designed by independent designer Shangguan Zhe. His design combines various cultures together including Chinese, Japanese, Black and American Street culture with a sense of humor that Chinese rarely have, carrying out a traitorous, unique and mysterious style)

To understand what an independent designer is, you should first understand what a designer brand is. Especially with the popularity of designer brands, more and more brands claim themselves to be “designer brand”. In academia and practice, a more widely perception is that designer brands apply creativity-driven design strategy. The designer brands are on the opposite of commercial brands, which focus on market-driven design strategy. This does not mean that the designer brand is not commercial and that commercial brand is not creative. It is only a matter of which aspect plays the dominant role. For designer brands, the Chief designer plays a strategic role in enterprise and for commercial brands, the designers are more subject to market demand. In terms of commercial scale, since designer brands pay more attention to the uniqueness of the design, their target customer group is relatively smaller than that of commercial brands and their commercial scale cannot be compared with commercial brands. Take two tycoon fashion companies as examples. One is a French luxury group company LVMH, which has acquired many design brands; another is a Spanish fast fashion originator INDITEX group – the parent company of ZARA. LVMH has nearly a hundred years of history and around 15 fashion brands under it. According to its 2014 financial report, the trendy product line has earned about 17.4 billion euros in 2014(other industries, including alcohol and real estate are not included). For INDITEX, it has eight brands and 40 years history. Its 2014 sales revenue was 18.1 billion euros. Although there is little difference between two companies’ annual incomes, LVMH has longer history than INDITEX and the number of fashion brands under LVMH is almost twice as many as the number of fashion brands under INDITEX. Therefore, you can figure out that LVMH’s single-brand revenue is far lower than INDITEX’s. However, even non-professional designers might also be very familiar with the designers of the creative brands under LVMH, but few people will pay attention to the designers behind ZARA. This is because ZARA is a company which typically takes “copying fashion, rather than creating fashion” as its design strategy.

From a practical point of view, the creative designers’ design style and the commercial-scale of the brand are contradictory. When a designer brand grows to a certain size, how to maintain the stable growth of earning and at the same time adhere to individual design ideas and style is a challenge that every designer must face. It is because the growth of revenue means that the brand needs to expand the consumer base, while expanding consumer base also means the designer should consider a wider range of consumers’ tastes and dress habits. When the consumer base is small, designer’s personal style is easier to find a group of customers that enjoy his or her style; but when the consumers’ need continuously expand, personal style may affect the size of the consumer base. As a result, the designer needs to find a balance between his or her personal style and the commercial scale, and finally it is likely that the designer becomes more inclined to satisfy the market rather than to express their individual idea.

For the concept of independent designers, there is no uniform or clear definition within academic circle. A conventional understanding is that the designers do design for their own brand and have greater autonomy on their brand. The investment may come from the designer himself or from the partners. Independent designers usually have their own studio. Both the commercial scale and the size of the staff of the studio are small. Their products can be sold at retail, at wholesale and by agent. They also provide design services for other companies.

Although the term “independent designer” emerges only in recent years, if we use the concept above to define independent designer, China has already had independent designers in 1980s. As time passed, some independent designers gradually disappeared and quitted design circles; some has developed their brand to a million-yuan-scale designer brand. After the reform and opening up policy, in the early 1980s, there were many fashion designers try to set up their own studio and to establish their eponymous brand, such as Ma Ling from Beijing, Ye Hong from Shanghai, and Liu Yang from Guangdong. These designers not only open a brand store in the mall, but also offer customized services. But for these entrepreneurial pioneers, the majority of them only existed for a very short period. This is the reason why the new generation of designers have never realized that China also had its own designers in 1980s and 90s. The reason can be both complex and simple. “Untimely” is the most direct and simple answer. At that time, both the overall business system, including market distribution system, brand building, marketing communications and consumers’ habits, ability and taste were not sufficient to support designer brands. The designer himself or herself fearlessly explores the market in a “trial and error” approach, almost no reference to any previous experience. In the understanding of design, the perception and vision of most designers are relatively isolated and monotonous due to the limitation of the objective conditions at the time. Another challenge of designer’s launching a brand is that because of the lack of understanding of business systems, all the pressure is placed on the brand creative designer, ignoring that the success of a brand requires cooperation. No matter how outstanding the designer is, he or she cannot build an excellent brand without the support of marketing, media, retail and other professional team.

The luckiest times for fashion designers start from mid-1990s to early 21st century. The most critical factor is that this is the beginning of the real development of China’s capital market. At present, several billion-dollar designer brands which were all born from a small studio in the early days, such as Exception de Mixmind, Tangy, ZUCZUG, and JEFEN, were all born in this period. This once again confirms precisely the essence of the design cannot be separated from business. Favorable business environment is a priority for the success of every brand. Of course, compared to pioneering designers in 1980s, both understanding of design and the grasp of the market trend of the designers that I call the “second generation designers”, have become more and more mature through business experience. Consumers’ single taste and drift habits have also gradually changed. The pursuit of “personality” began to be the mainstream. All of the factors have created good conditions for second-generation independent designers to grow into big brands.

(Designed by Liu Yang in 1990. The collection is not out of date at all even in current point of view. One of the ways of subverting tradition for students from Saint Martin is reducing the use of cloth in terms of material selection. A work from CSM graduation show is using fish tank in the design, while Liu Yang has already put the goldfish into a plastic package  in the early 90s)

(Designed by Wang Xinyuan in early 90s. No one will say that women at that period of time don’t know fashion by only looking at the design)